In ancient Rus mosaic appeared in the 10th century, namely after the state adopted Christianity. Moreover, this type of monumental art in that period of time developed slowly. This is explained by the fact that the material for mosaicking cost quite expensive, smalt could not produce, and had to be brought from overseas.

Mosaic art era 10 - 13 centuries can be roughly classified into two types - this floor decoration in churches, cathedrals and churches of a number of ancient cities such as Chernihiv, Rostov, Kiev and decoration of walls, arches and domes monuments.

At the moment, the unique beauty of the mosaic paintings of the 10th - 13th centuries are in Kiev Saint Sophia Cathedral and St. Michael's Monastery.

As for the mosaics of Hagia Sophia, it should be emphasized that they are different bright color and rich colors. Paints are so saturated that it's amazing how clear and elegant medieval masters were able to convey naturalism and naturalness of their works.

In the main part of the Kiev cathedral mosaic compositions located in the altar under the arch and the dome. They decorate the walls of the apse, ble, conch, sails and arches. Using a mosaic manner master wanted to emphasize the main part of the cathedral, which took place in religious rituals and worship, that they, in fact, failed.

Upon entering the Hagia Sophia, the visitor, primarily focuses on the large mosaic located in the apse. On a gold background curved surface Conch before the viewer is presented with the image of the Virgin Orans upraised hands up. Mosaic picture of the "Virgin Orans" is a key element of the interior of the cathedral. Mary's head, slightly bent toward the Son of God, crowned mafory purple, decorated with gold, which are clearly visible star on his forehead and shoulders. Mozaichist, creates a picture of Virgin Orans in the 1040-ies, so expertly managed approach to work that is almost negligible when the rows of cubes glazes move from one direction to another.

Under the mosaic "Virgin Orans" is no less colorful mosaic picture "The Eucharist", which depicts the story of Communion of the Apostles. The work was created in the 11th century. In the center of the composition - the throne, which are the angels along with ripidami. Next to them twice a figure of Christ, who performs the rite of Communion of the Apostles, treating them with bread and wine. In its composition mozaichist used materials of different colors, which confirms the crimson throne, purple tunic with gold and blue pleated cloak of Christ.

Create mosaic pictures for the Cathedral of St. Michael's Monastery in Kiev falls on 1112. The interior of the temple had a certain similarity with the internal arrangement of the Hagia Sophia, but the artistic style in a paper traces. In particular, the plot of "Eucharist" images do not have the heaviness that is clearly manifested in the mosaics of St. Sophia Cathedral. Saints seem slimmer figure above, their movements more relaxed, more relaxed posture, gaze calmly.

Mosaic "Demetrius of Thessaloniki", belonging to the number of works that adorn the walls of the monastery of St. Michael, is currently in the Tretyakov Gallery. This work was created in the period from 1108 to 1113 years.

Holy Demetrius of Thessalonica depicts a young warrior holding a sword. Luxury apparel and pose ruler creates the impression that Dmitry - an exuberant and fearless Kyiv prince - a warrior. He was killed during the reign of Emperor Diocletian in that adhered to the ideas of Christianity. Holy Demetrius of Thessalonica defended the interests of the soldiers and was a patron of the Slavs. On the mosaic canvas Dmitry enthroned, holding a sword. There is a sign on the throne of Vsevolod the Big Nest. His holy image symbolizes the "arbitrator" and defender of the Russian people. This mosaic of different palettes smalts huge variety, which confirms the combination of pale pink and green colors of clothes with golden armor. 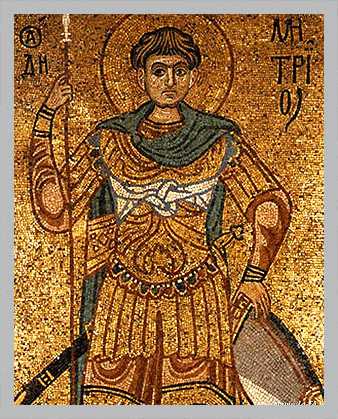 Mosaic works of the Cathedral of the Archangel Michael can be considered the last monuments of this kind of monumental painting, made ​​in ancient Russia. Subsequently, temples and cathedrals stop decorate mosaic mural will replace it.